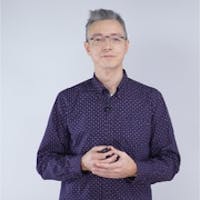 Yurii Aulchenko received his PhD in animal genetics in 2000 at the Institute of Cytology and Genetics in Novosibirsk, Russia. From 2001 to 2011, he worked at the Erasmus Medical Center in Rotterdam, the Netherlands, first as a postdoctoral fellow, then as an assistant professor and associate professor in the field of human statistical genomics. In 2011, Yurii Aulchenko founded PolyOmica, a company based in the Netherlands that provides services in computational genomics. In 2012, he was named an Honorary Professor at the College of Medicine and Veterinary Medicine at the University of Edinburgh. Since 2014, Yurii Aulchenko has led the Laboratory of Theoretical and Applied Functional Genomics at Novosibirsk State University, and, since 2016, has served as a Leading Scientist at the Institute of Cytology and Genetics in Novosibirsk. Yurii Aulchenko has taught many courses and workshops in the fields of statistical, quantitative, and computational genetics and genomics. His main research interests include developing and applying methodological and applied aspects of quantitative genetics and addressing fundamental questions regarding the genetic control of multidimensional ensembles of traits.

From Disease to Genes and Back