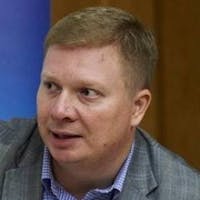 Dmitry Suslov conducts research on various issues of international relations, including US foreign and domestic policy and Russia-US relations, Russian foreign policy, Russia-EU relations. He regularly consults the Russian government institutions and business enterprises on these and other issues. He is also a Senior lecturer at the Faculty of World Economy and International Affairs of the National Research University Higher School of Economics since 2006, as well as Deputy Director for Research at the Council on Foreign and Defense Policy since 2004.

Dmitry Suslov has co-authored several books (incl. The U.S. Policy in Asia Pacific (2014), Non-Military Instruments of the Russian Foreign Policy: Regional and Global Mechanisms (2012); Russia: a Strategy for the New World (2011); Russia vs. Europe. Confrontation or Alliance? (2009); Russia and the World. A New Epoch (2008); The World Politics (2008); The World Around Russia: 2017 (2007). At the Higher School of Economics (School of World Economy and International Affairs) he teaches courses on the US Domestic and Foreign Policy, Introduction to International Relations, Global Governance, US-Russia Relations, and Russia-EU Relations.