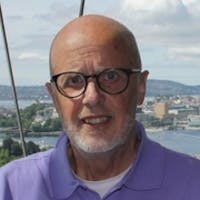 Kenneth Hugdahl, professor of biological psychology at the University of Bergen, Norway. Kenneth Hugdahl studied psychology at the University of Uppsala, Sweden and took a PhD degree in 1977. He spent the fall of 1979 as postdoc at the Department of Psychology, University of Pennsylvania, USA, and after a short return to University of Uppsala, Sweden, he took up a permanent position as professor of biological psychology at the University of Bergen, Norway in 1984. He has published extensively in research areas related to understanding brain function, in particular the relation of hemispheric asymmetry and language, and in later years understanding the neuronal foundations if auditory hallucinations in schizophrenia. He pioneered the use of functional magnetic resonance imaging (fMRI) in Norway, and has published extensively in his research areas, and received numerous prizes and awards. He has twice received a European Research Council (ERC) Advanced Grant (2010, 2016) award for research on the neurobiology of auditory hallucinations. In his spare time he likes outdoor activities, and is a profound jogger for more than 30 years.