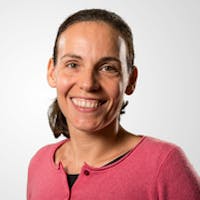 Mercedes Paniccia is Senior Research Associate at University of Geneva in the team of Professor Martin Pohl. She has done her studies in Physics at University of Rome “La Sapienza” in Italy, where she obtained a Master’s degree in Particle Physics presenting a thesis on search for the Higgs boson with the ATLAS experiment at the Large Hadron Collider. After graduation, she pursued her studies in AstroParticle Physics as a PhD student at University of Geneva, working in the space experiment AMS under the direction of Professor Martin Pohl. She obtained a PhD in Physics with a study on solar activity effects on cosmic-ray fluxes detected in near-Earth space by the prototype AMS detector. She contributed to the construction of the semiconductor detectors for the AMS Silicon Tracker, and to the calibration and the commissioning of the electromagnetic calorimeter of the same experiment. She has also worked on the detection of neutrino oscillations at the OPERA experiment in Italy. She is currently actively engaged in university teaching, while carrying on her research on cosmic rays with the AMS experiment.