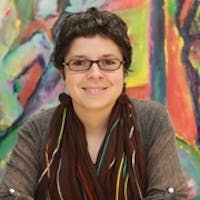 Marcela Hernández Hoyos was born in Bogotá, Colombia. She received her undergraduate degree in 1993 and her MS degree in 1996 in Systems and Computing Engineering, from the Universidad de Los Andes (Bogotá). In 1998 she obtained a MS degree in Biomedical Engineering from the Center for Research and Applications in Image and Signal Processing (CREATIS Lab.) at the National Institute for Applied Sciences (INSA) of Lyon, France. She subsequently carried out research on vascular image processing at the same institution under an industrial grant. In 2002 she obtained her PhD degree with honors. The main result of her PhD work is the MARACAS (MAgnetic Resonance Angiography Computer Assisted AnalysiS) software, which was acquired by Hitachi in Japan. Since 2004 she has been involved in teaching and research activities. Presently, she is working as associate professor at the Systems and Computing Engineering Department of the Universidad de Los Andes. Her main research interest is in medical image processing with particular emphasis in pulmonary, vascular and neuro-degenerative pathologies. Among her most important research achievements is the granting of an invention patent (in Japan, in United States and in the European Community) on a method of abdominal adipose tissue segmentation and quantification. In the academic field, Professor Hernández has been permanently recognized for her teaching qualities. Currently, she is in charge of the coordination of the programming courses at the University and she has developed multiple pedagogical innovations in these courses, which resulted in the creation of a Coursera MOOC, which was rated one of the top 20 best MOOCs launched in 2017 according to the Central-Class platform (among 2000 courses evaluated). Between 2009 and 2012 she worked as Deputy Head of the Systems and Computing Engineering Department and later as Vice Dean for Academic Affairs of the Engineering School.