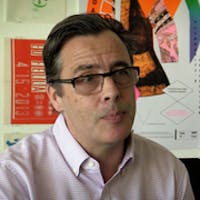 Michael Worthington is the founding partner of Counterspace (Los Angeles), a graphic design studio specializing in editorial and identity work for cultural clients. His recent book designs include A New Sculpturalism, Made in L.A. 2012, and More Real, as well as catalogues for Mark Bradford, William Leavitt, Amanda Ross-Ho, Meleko Mokgosi, Alice Konitz and Samara Golden. His work has been published widely and exhibited in Belgium, Italy, England, the Czech Republic, El Salvador, Japan, France, China and the US, and he has lectured in Korea, Belgium, Holland, Australia, England, France, Mexico and across America. He has been a judge for the California Design Biennial, Output, the AIGA and the ADC and curated the design show “Two Lines Align” at REDCAT. His writing has been published in Eye, Print, Slanted, and Threaded magazines, and various design books, most recently Earthquakes, Mudslides, Fires and Riots: California and Graphic Design 1936–86. He has taught at the California Institute of the Arts since 1995.