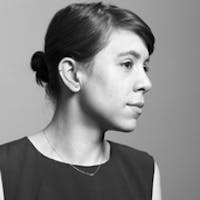 Sophie Cavoulacos is Assistant Curator in the Department of Film at The Museum of Modern Art, where she organizes moving image programming and exhibitions. In 2017, she organized the gallery exhibition Club 57: Film, Performance, and Art in the East Village, 1978–1983 and the film series New York Film and Video: No Wave–Transgressive with Curator Ron Magliozzi. She is on the selection committee for New Directors/New Films and is the lead curator for Modern Mondays, the avant-garde series to which she has contributed evenings with Alexander Kluge, Bernadette Mayer and Morgan Ritter, Metahaven, Nazli Dincel, and Semiotext(e), among others. (Photo credit: Brigitte Lacombe)

What Is Contemporary Art?