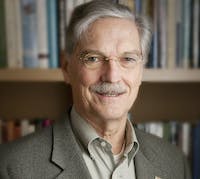 Bob Lawrence is Center for a Livable Future Professor Emeritus in the Department of Environmental Health and Engineering at the Johns Hopkins Bloomberg School of Public Health and the founding director of the Center for a Livable Future. Dr. Lawrence graduated from Harvard Medical School and is a founding director of Physicians for Human Rights (PHR), a human rights advocacy group that shared the 1997 Nobel Peace Prize for its work to ban anti-personnel landmines. Dr. Lawrence chaired the first US Preventive Services Task Force, and he has chaired committees for the Institute of Medicine and the National Research Council. In his position as director of Health Sciences at the Rockefeller Foundation before joining the faculty of JHSPH, Bob worked with colleagues directing programs in Agricultural Sciences, Population Sciences, and Environmental Sciences and learned about the multiple connections among agriculture, food production, population, the environment, and public health. In 1996, together with a team of people both inside and outside the Johns Hopkins Bloomberg School of Public Health, Bob established the Center for a Livable Future (CLF) and began recruiting staff. From its modest beginnings in 1996 to its burgeoning staff today, the Center has continually focused on using the best science available to bring to light the relationships among agriculture, diet, environment, and public health.