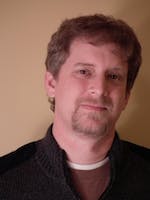 Zeke is Teacher-In-Residence in the Exploratorium’s Teacher Institute. Zeke’s primary role is to train and support coaches and mentors who work with novice science teachers in their first two years in the classroom. Zeke taught high school science for 21 years in Houston, Dallas, New Orleans, and San Francisco. He believes that science education starts when students construct their own understanding of the world. In 2011, he was selected to be an Albert Einstein Distinguished Educator Fellow at the National Science Foundation. During his time there he worked with Congress and the White House on important science education issues, including writing a white paper on using large datasets in the classroom. In addition, he has worked as a science advisor for both NBC Learn and Discovery Digital. For fun, Zeke puts on physics circus shows. He thinks of them as magic shows, but in reverse—the secret to a magic trick is to make something simple intentionally confusing, while Zeke tries to make confusing things easy to understand.