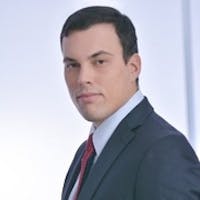 Lee Reiners joined the Duke Global Financial Markets Center as executive director in 2016. At Duke Law, Reiners teaches FinTech and the Law as well as seminars relating to financial policy and regulatory practice. He writes frequently on FinTech and other financial regulatory matters on The FinReg Blog. Prior to joining Duke Law, Reiners worked for five years at the Federal Reserve Bank of New York (FRBNY), first as a supervisor of systemically important financial institutions and then as a senior associate within the executive office. In the latter capacity, he helped coordinate the FRBNY’s engagement with international standard-setting bodies, such as the Bank for International Settlements and the Financial Stability Board. While at the FRBNY, Reiners worked closely with other federal and state regulatory agencies. Reiners has previously taught corporate finance and managerial economics in the MBA Program at Saint Peter’s University. In 2004-2005, Reiners served as a U.S. Army communications specialist in Baghdad, Iraq. Reiners received a BSc in business economics, summa cum laude, from the University of St. Thomas and a MPP with a global policy concentration from Duke University’s Sanford School of Public Policy. Reiners holds the chartered financial analyst designation.