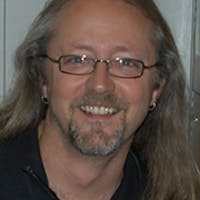 As a doctoral student I researched and wrote a thesis on the pattern and process of limb evolution in aquatically adapted reptiles. I studied the limbs of spectacular fossil sea monsters such as ichthyosaurs, plesiosaurs, crocodiles and mosasaurs (the only true lizards on this list). While examining specimens in collections at the Natural History Museum in London, I came across some beautiful fossils of a small marine lizard from the English Chalk, Dolichosaurus longicollis , that just happened to be related to the mosasaurs I working on for my thesis. A little bit of research on the topic made it clear that no one had seriously investigated the paleontology and systematics of Dolichosaurus and its kin since the 1920's, and that in particular, this species had not been re-examined since the original description by Sir Richard Owen in 1850. I decided to give it a whirl even though I knew very little about squamates at the time. Fifteen years later, the who, how, why, where and when of the seven thousand living species of snakes and lizards, and the thousands of fossil forms, remains endlessly fascinating to me. In the attempt to find answers to some of these problems, I have traveled the world in order to discover new specimens still in the rock and to find old specimens languishing in museum collections. I have described, along with numerous friends and colleagues, snakes with legs that lived in 100 million year old oceans that are now the deserts of the Middle East and the mountainous coastlines of Croatia and Bosnia-Hercegovina. I have collected mosasaurs from the coast of New Zealand to the desert prairies of Southern Saskatchewan. I have mined platy limestones on the island of Hvar, Croatia in the hunt for small marine lizards, and have combed the museums of Japan in my search for giant mosasaurs that 80 million years ago, lived in the northern Pacific Ocean. The goal of all this fieldwork and collections study is to provide new data for a research program (myself, my colleagues and my graduate students) that is focused on learning everything we can about the paleontology, origins and evolution of squamate reptiles. My approach to collecting new data is geared towards the information to be found in the anatomy and morphology of these animals, both fossil and modern. The hope is that the resultant phylogenies will be a useful foundation for producing broader statements on their evolution (e.g., limblessness, aquatic adaptations such as paddle-like limbs, gigantism, modifications to the eye and ear, etc.) Any inference of evolutionary processes must be based on the prior discovery of evolutionary patterns, i.e., phylogenies, that are constructed independent of the organ system or feature under study. The empiricism of process scenarios is derived from the pattern deduced during phylogeny construction. Morphological data from fossils remains the only available data for many ‘deep' nodes within a phylogeny, despite the utility and value of molecular data. This is particularly true when all extant taxa are found to members of the crown-group. Further, if the group being studied is only known from fossil evidence (e.g., mosasaurs), then morphology is the only informative data set on phylogenetic relationships and paleobiology. The analysis of morphology will always remain as a means of retrieving critical ‘ancient' data. New technologies, such as CT Scanning and digital image collection and analysis, provide essential new information on the details of morphology (high definition microscopy and SEM), and new information on the internal details of fossil skulls (CT Scanning). Digital data on morphology is easily manipulated and analyzed. It is also much easier to share this data around the globe.