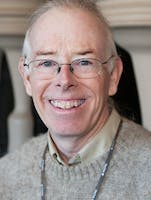 I am a physicist, teacher, author, and rock climber with a Ph.D. in solid-state physics from the Massachusetts Institute of Technology. As a tenured professor at Oakland University, I taught a wide range of science courses, including physics, astronomy, geology, electronics, computer programming, and meteorology. In 1986, I came to the Exploratorium Teacher Institute and began my exhibit-based explorations in science. As an author, I have written over two dozen articles for Exploring magazine, and have co-authored the Exploratorium Science Snackbook, the Klutz Book of Magnetic Magic, and the book, Traces of Time: The Beauty of Change in Nature. For musical entertainment, I play the whirly—a corrugated plastic tube. In pursuit of whirly excellence, I have won several competitions, including an award as “Best Science Demonstrator” at the World Congress of Museums in Helsinki in 1996. I recently had fun performing physics activities on Late Night with David Letterman. I am about to finish my second decade as a rock climber, and my second vertical marathon, 26 miles of rock climbing.