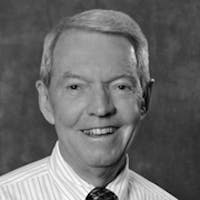 Following more than 30 years of success in the business world, ultimately serving as a chairman and CEO of a NYSE company, William J. White has spent the past 15 years teaching and advising students on their careers as a professor at Northwestern University. White’s research focuses on what makes a successful transition to a new position: the onboarding process. A popular speaker and the author of From Day One, a career guide targeted to young graduates, White has been recognized as an outstanding teacher at Northwestern and at its McCormick School of Engineering and Applied Science. In addition to serving on numerous public company boards, he has been a director of multiple private and nonprofit organizations. Some of those include Reader’s Digest Association, USG Corporation, and Bell & Howard Company, where he also served as Chairman and CEO. Mr. White is a life trustee of Northwestern University, NorthShore University Health system, and the Field Museum of Chicago. Mr. White is an Industrial Engineering graduate of Northwestern University, and he received an MBA degree from Harvard University. He lives on Chicago’s North Shore and has four children and thirteen grandchildren.