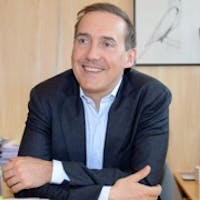 Gaël Giraud is a senior researcher at the CNRS (French National Center for Scientific Research), a professor at the Ecole Nationale des Ponts Paris Tech' and Stellenbosch University, and an associate fellow at the Nantes Institute for Advanced Studies. Giraud’s work focuses on alternative measures of development, general equilibrium theory, game theory, finance and energy issues. He is the founder and has been director of the Chair Energy and Prosperity (2015-2020). He has been Chief economist at the Agence française de développement from 2015 to 2019 where he developed a modelling tool - called GEMMES - that incorporates the energy transition into macroeconomics. He was a member of the Steering Committee for Energy Transition in the French government in 2013 and of the Stern-Stiglitz high-level commission on carbon pricing. Gaël Giraud is a former student of the Ecole Normale Supérieure Paris and the National School of Statistics and Economic Administration (ENSAE). He earned his Ph.D. in mathematics at the Ecole Polytechnique of Paris in 1998.