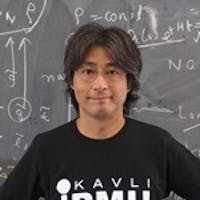 Hitoshi Murayama received his Ph.D. in theoretical physics from University of Tokyo in 1991. He worked as a Research Associate at Tohoku University from April 1991, and was a postdoctoral fellow at Lawrence Berkeley National Laboratory from September 1993. He joined the Physics Department at UC Berkeley in July 1995, became an Associate Professor in July 1998, and Professor in July 2000. Professor Murayama is also the Director of Kavli Institute for the Physics and Mathematics of the Universe (Kavli IPMU), Todai Institutes for Advanced Study (TODIAS), at University of Tokyo, as of 2013. He received Yukawa Commemoration Prize in Theoretical Physics and is a Fellow of American Physical Society. He is elected to 2013 Fellow of American Academy of Arts and Sciences. He is well-known for his clear lectures for students and general audience.