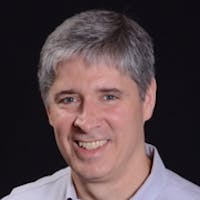 Kevin Lynch is Professor and Chair of the Mechanical Engineering Department at Northwestern University. He is a member of the Neuroscience and Robotics Lab (nxr.northwestern.edu) and the Northwestern Institute on Complex Systems (nico.northwestern.edu). His research focuses on dynamics, motion planning, and control for robot manipulation and locomotion; self-organizing multi-agent systems; and functional electrical stimulation for restoration of human function. Dr. Lynch is Editor-in-Chief of the IEEE International Conference on Robotics and Automation and incoming Editor-in-Chief of the IEEE Transactions on Robotics. He is co-author of the textbooks "Principles of Robot Motion" (MIT Press, 2005), "Embedded Computing and Mechatronics" (Elsevier, 2015, http://nu32.org), and "Modern Robotics: Mechanics, Planning, and Control" (Cambridge University Press, 2017, http://modernrobotics.org). He is an IEEE fellow and the recipient of Northwestern's Professorship of Teaching Excellence and the Northwestern Teacher of the Year award in engineering. He earned a BSE in electrical engineering from Princeton University and a PhD in robotics from Carnegie Mellon University.