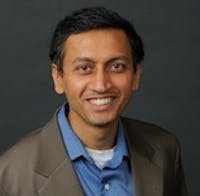 Kartik Hosanagar is a Professor at The Wharton School of the University of Pennsylvania. Kartik's research work focuses on the digital economy, in particular Internet media, Internet marketing and e-commerce. Kartik has been recognized as one of the world's top 40 business professors under 40. He has received several teaching awards including the MBA and Undergraduate Excellence in Teaching awards at the Wharton School. His research has received several awards including the best paper award at the Consortium on Technology Policy and Management. Kartik is a cofounder of Yodle Inc, a venture-backed firm that has been listed among the top 50 fastest growing private firms in the US. He has served on the advisory board of Milo Inc (acq by eBay) and is involved with other startups as either an investor or board member. His past consulting and executive education clients include Google, Nokia, American Express, Citi and others. Kartik graduated at the top of his class with a Bachelors degree in Electronics and a Masters in Information Systems from Birla Institute of Technology and Sciences (BITS, Pilani), India, and he has an MPhil in Management Science and a PhD in Management Science and Information Systems from Carnegie Mellon University.